Storyline: Adrian and Duru get lost in the characters they play in an apocalyptic film and embark on a secret mission to end the world for real.

Update #25 (June 24, 2021): 1st draft director’s statement to be submitted to festivals: “We shot We Put the World to Sleep over a period of 5 years in over 12 cities, villages and remote locations in Romania, Turkey and Ukraine. My filmmaking method usually consists of working for months (years in this case) on an alternative psychological reality for the actors including myself, partially living in character, so that when we start improvising, I mainly need to record the unfolding events and to make sure the improvisation goes in the right direction. There is usually no detailed script, only plot points. I shoot tens of hours of footage guerrilla style (about 200 hours for We Put the World to Sleep), and then I watch the footage like a documentary filmmaker would and I create the details of the story in post-production during the editing process.”

Update #24 (June 16, 2021): We Put the World to Sleep‘s team grew bigger! Eli Griffen is our new executive producer, Marcel (anonymous), Brian Trevor Jones, Mine Yücel & Haydar Yücel are our new associate producers, and Thomas (anonymous), Denis Ariel & Radu-Andrei Horghidan are our new patreon producers! Check out the full cast & crew on the official site and IMDb! Anyone can join the team by supporting the movie via Patreon.com/AdrianTofei, PayPal.me/AdrianTofei or bank account. If interested in contributing, please contact us for details. Multiple other cool perks await you!

Update #23 via Adrian Țofei on Facebook: “We’ve just finished shooting the last scenes in We Put the World to Sleep. Duru was magnificent! Incredible performance! And I have no words to describe what we shot without spoiling it. We deviated from the script during a super long sustained impro of over 17 hours (began at 11am, ended at 5am next day). This weekend we might still shoot some extra scenes, and on Monday I begin editing!“

Update #22 via Adrian Țofei on Facebook: “Both Duru and I are genuinely creeped out about a certain room we arranged in a certain way for We Put the World to Sleep. When I was in character the past days, I loved being inside. But today I took a break and it gives me creeps just when passing in front of the door. As preparation for the role, I was thinking that I’d have to sleep inside for a couple of nights. But one was more than enough to get into the character! I’m warning you, I won’t be responsible if anything happens to you as a result of watching this movie when available.“

Update #21 via Adrian Țofei on Facebook: “Yesterday with the help of Duru I got inspired and came up with a very cool beginning and ending for We Put the World to Sleep! I wasn’t fully satisfied with what I had before and now I am.

One day of shootings left, can’t wait to begin editing the film!“

Update #20 via Adrian Țofei on Facebook: “About to wrap shootings for today. Remember I was saying yesterday I did the creepiest thing ever? Well, today I’ve outran my own record. And there are still a couple of days of shootings left where things will get even creepier! You’re in for a real treat in We Put the World to Sleep.“

Update #19 via Adrian Țofei on Facebook: “The set design I finished today for the last scenes in We Put the World to Sleep is probably the creepiest thing I ever did. Was planning to also finish shooting today, but the set design took all my energy. I did shoot though one good moment which might end up in the final cut. Will resume tomorrow!“

Update #18 (May 25, 2021): Adrian Țofei has put together and published on his website a super comprehensive festival strategy for the movie! That’s an essential step forward for the production. Over 250 great festivals on the horizon!

Update #17 (May 20, 2021): We have a first teaser clip! Subscribe to Adrian Țofei’s YouTube channel and click the bell to get all notifications! More teasers coming up soon!

Update #16 (February 8, 2021): After careful considerations, we’ve decided to return to shooting We Put the World to Sleep. We need more footage for the second part of the movie. The short film Adrian Țofei I’m working on, Source of Evil, will also be included in the feature. Also, by the time we finish the film, hopefully more festivals will reopen. Even if we managed to finish the film by now, premiering it during the pandemic, when most festivals are closed or moved online, wouldn’t have been a good idea. So we think all this delay will be for the best. This project proved to be more difficult than imagined, but we have to get it right and it has to make waves, because that’s the only way it will be successful. We’ll keep you posted.

Update #15 (January 2021): We’re still in post-production, the details continue to evolve and we might return to shooting more scenes or even crowdsource some moments, giving fans full creative control to shoot found footage scenes which might end up in the final movie (and those that won’t will still be included as extras on the DVD and/or Blu-ray release).

Update #14 (June 16, 2020): New film stills! Some of these exact moments might not end up in the final cut, but similar moments will for sure. The colour correction is also just for show, we haven’t decided yet the final look of the film. 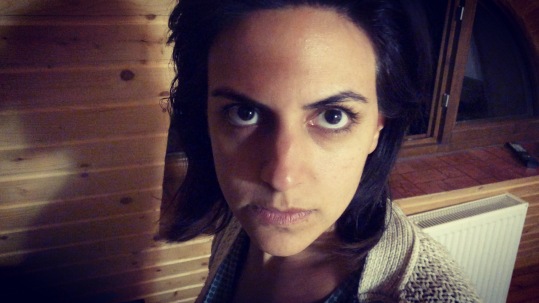 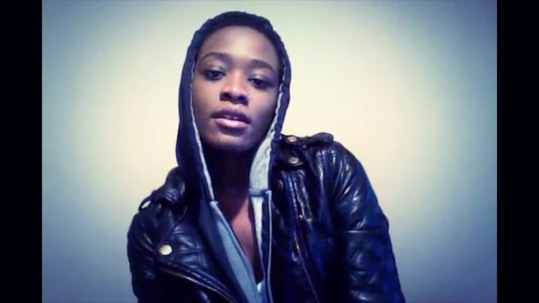 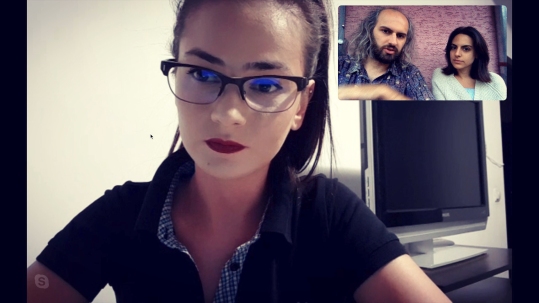 Update #13 (May 14, 2020): “We Put the World to Sleep” has been listed #52 in top 100 most anticipated films of the year that should be seen at the Cannes Film Festival! This respected French publication gives Quinzaine des Réalisateurs (Directors’ Fortnight) as a potential section for my film. As some of you may know, Cannes this year didn’t happen because of the pandemic. We’ll hopefully have the movie ready in time to submit it to the next edition and fingers crossed, hoping to be selected.

Update #12 (April 30, 2020): “We Put the World to Sleep” has been listed in the official catalogue of upcoming Romanian films! (page 45). The catalogue has been presented at the Berlin European Film Market & should go to Cannes & other festivals once they resume activity after the pandemic. It was put together by Ştefan Dobroiu for Romanian Film Promotion with the support of the Romanian Film Centre & the Romanian Filmmakers Union. Erisse Peterson is missing from the cast because she was not part of it when the catalogue was made. Happy to announce that she rejoined the project recently and you’ll see her in the movie in a very interesting & unexpected way! 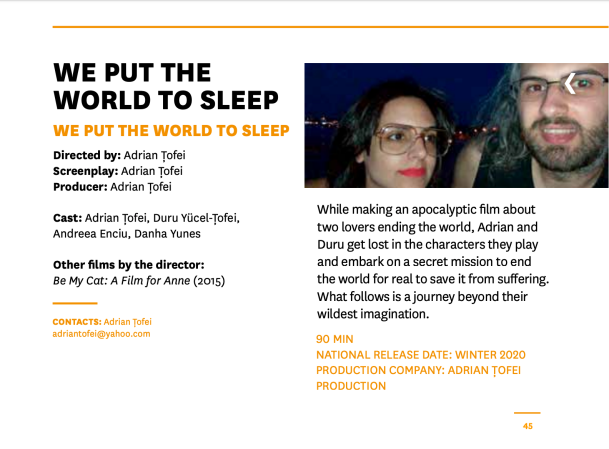 Update #11 (February 2020): We Put the World to Sleep is going to be the second movie in Adrian Țofei‘s meta-cinema trilogy which will also include Be My Cat: A Film for Anne and Dr. Frankenstein. Adrian will then re-edit all three films (which have intertwined universes & characters) into one single ultra-realistic, meta & metaphysical movie. Support this ambitious project on Patreon.com/AdrianTofei and get exclusive rewards:

Update #9 (January 18, 2020): An important film festival in the US expressed interest in negotiating the world premiere of We Put the World to Sleep! It’s the second festival expressing early interest in the movie (a top European fest emailed us twice a couple of years ago). We’re going to be featured shortly in a top European film publication as well! And also in a catalogue of upcoming Romanian films which will be presented at the Berlin Film Market, and later in Cannes! So things are good! We’re moving in the right direction!

Update #8 (November 11, 2019): We finished shooting a couple of days ago, on November 7th! Over 90 hours of footage shot in 4 months (starting July 3rd) in 12 cities and villages from Romania, Turkey and Ukraine (plus the US via Skype!), and that’s without counting the pre-recordings we did in the last years while developing the project, which might also end up in the final cut! Now we’re about to begin a long process of editing, and once we have a teaser trailer we’ll launch a new crowdfunding campaign to be able to submit the movie to top festivals! Thank you so much to everyone who helped us so far!

Update #7 (August 6th, 2019): We shot for about two weeks in Romania and now we’re back in Turkey, getting ready for another important scene. We also received an extra investment to finish shooting, and for the rest of expenses (editing, festivals) we plan to make a new crowdfunding campaign as soon as we have a trailer.

Update #4 (June 22, 2019): We’re in Ceșme (Izmir, Turkey), a bit late on filming, doing the last technical preparations, with the goal to start shooting either this evening or tomorrow morning. We will continue to accept the so-much-needed donations and investments for the entire duration of production and post-production. Your support is essential!

Update #3 (May 22, 2019): We start shooting on June 16th. There’s very little time left to raise the full budget, so we did some changes to be able to shoot with even less than planned. But it’s crucial that we get more money, otherwise we might be forced to stop in the middle of shootings. Please check this site and support the project anyway you can, via investments, donations or sharing. Thank you so much!

Update #0: After a prolonged hiatus due to various reasons (con-artist Andrea Corbella being the main one), we finally managed to restart pre-production and this time for good, with a highly improved concept and a mind-blowing ending for the movie. We’re getting ready to shoot this spring (June 2019), but we need at least $5,000 extra budget because of all the extra expenses. You can support the project by donating in exchange for producer and thanks credits (onscreen and on IMDb).