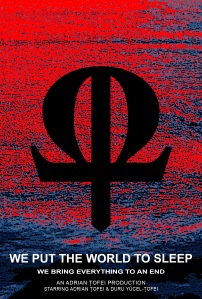 Update #3 (May 22, 2019): We start shooting on June 16th. There’s very little time left to raise the rest of the budget, so we did some changes to be able to shoot with even less than planned. But it’s crucial that we get more money, otherwise we might be forced to stop in the middle of shootings. Please check this page and support this project anyway you can, via investments, donations or sharing. Thank you so much!

Update #1 (March 26, 2019): We just got a new $500 contribution from Jacob Hair and he became our new Associate Producer! So now we need $4,500 more to start the shootings, either from investments or donations. Please share!

After a prolonged hiatus due to various reasons (con-artist Andrea Corbella being the main one), we finally managed to restart pre-production and this time for good, with a highly improved concept and a mind-blowing ending for the movie. We’re getting ready to begin shootings this spring (June 2019), but we need $5,000 extra budget because of all the extra expenses.

You can support the project by either donating or investing in exchange for producer credits (onscreen and on IMDb) and returns on your investment:

Storyline: While making an apocalyptic film, the director and the lead actress fall in love and embark on a secret mission to end the world for real using the work on their film as cover.

Adrian Țofei directed, produced, wrote and starred in Romania’s first found footage horror movie, Be My Cat: A Film for Anne, for which he won multiple awards and critical acclaim, including Best Film at A Night of Horror Film Festival in Sydney and Best Actor at Nashville Film Festival. Be My Cat was called “terrifying” by Austin Chronicle, “a new intelligent found footage film you need to see” by Blumhouse, got listed by Dread Central in Top 5 Best Horror Movies of 2016 and has an 80% score on Rotten Tomatoes.

Adrian plans to do We Put the World to Sleep based on controlled improvisation, work on the movie till it’s strong enough to break through the world’s top general film festivals (Cannes, Sundance, Toronto, Venice, Berlin, Telluride, SXSW, Tribeca) or top genre festivals (Sitges, Fantasia, Fantastic Fest) and secure a top distributor that would release the film worldwide and bring a return on everyone’s investments.